Gunter is the Ice King’s slave penguin who makes an appearance in many of the episodes with the Ice Kingdom in them, and is the only known penguin with a name. Gunter makes her first appearance in “What is Life?” alerting the Ice King of intruders – Finn and Neptr. Gunter appears again in “What Have You Done?” the Ice King tells Gunter to dispose of Finn’s apparently dead carcass, and in “It Came From the Nightosphere” Marceline’s Dad asks for her soul. He says “of all history’s greatest monsters, you are by far the most evil thing I have ever encountered. Offer your soul to me, dark one”. When Gunter squeals, Marceline’s Father takes it as a no. Gunter appears again in “The Chamber of Frozen Blades” in which Ice King rushes Gunter, who apparently has an illness, to the hospital. It turns out Gunter was pregnant, revealing that she is a girl. Gunter can be seen later in the episode hugging her egg. In “Still” Gunter is revealed to be a troublemaker, breaking Ice King’s potion bottles. Her name has been pronounced Gunter, Gunther, and Goon-Ter. 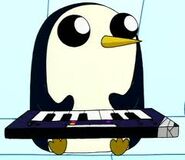 Add a photo to this gallery

Retrieved from "https://adventuretimewithfinn.fandom.com/wiki/Gunter?oldid=4604"
Community content is available under CC-BY-SA unless otherwise noted.