Finn (Originally named Penis) is the main character in the show “Adventure Time”. Finn stars as a major character in every episode, battling with a sword and a hat thingy to hide Finn’s long, beautiful princess hair (The Princess hair bit is revealed in the episode “To Cut a Woman’s Hair).

Finn is an orphan; in the episodes it is mentioned many times that Finn is last of the humans, although in the episode “Susan Strong” Finn and Jake find an underground land of humans (but these ones are blood sucking and stupid). In “Memories of Boom Boom Mountain”, it is shown that Finn was brought up by dogs.

Finn doesn’t have a girlfriend or wife of any kind, although he does have a massive crush on Princess Bubblegum and has gone on two dates with her; the first being in “To Cut a Woman’s Hair” to get a lock of her beautiful princess hair, and the second being in “Go With Me” to ask her out to the movies.

Finn is an extreme adventurer, and will help anyone in need, no matter how small their problem (revealed in “Memories of Boom Boom Mountain), and will always fight a wrongdoer such as the Ice King, but will never battle any villain who has done nothing wrong (revealed in “What Have You Done?”).

Finn’s greatest enemy is the Ice King, he loves a good fight, but Finn does help the Ice King sometimes, like in “When Wedding Bells Thaw” and in “Mortal Folly” but their favourite time with the Ice King is BEAT UP TIME.

Finn also has a more emotional side to him, like in “Donny” when he says that a grass ogre called Donny was really much like Finn himself. It is revealed in “Storytelling” that Finn will be put to sleep immediately after the beginning of any story and in “City of Thieves” Finn boasts that he is the only adventurer that could walk out of the city of thieves “pure”.

Finn wears a white hat that covers up his long blonde hair and his ears, making him look like a rabbit. In the original, Finn says that his hat is awesome. Finn has been known to eat many odd plants and objects in the past, including a broom in "Wizard" to recieve his first star badge.

Finn has many weapons,but his favourite is his faithful golden sword (or not so faithful, as in "The Real You" Finn's sword is destroyed by a black hole he created. Jake also has a sword.

Finn loves adventure movies, as revealed in "Video Makers" and hates romance movies. In "Go With Me" Finn throws up after watching a terrible romance movie. Finn argues many times with Jake about romance movies. 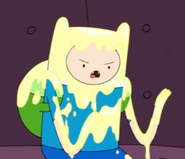 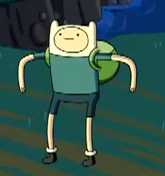 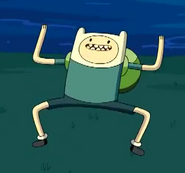 Add a photo to this gallery
Retrieved from "https://adventuretimewithfinn.fandom.com/wiki/Finn?oldid=4638"
Community content is available under CC-BY-SA unless otherwise noted.